In the Pyrenees mountains, the angler will enjoy the abundant rivers of glacial origin such as the Ara River, which remain unregulated and still in a virgin state. Rivers of all kinds and high mountain lakes in which you can fish Silver Trouts (Salvelinus fontanalis) or actual Trouts (Salmo truta fario) with a totally natural behaviour.

This Pyrenean river serves as the border between Aragon and Catalonia, which share the Canelles and Santa Ana reservoirs. The landscape is rugged and forms overwhelming gorges such as Montrebei, with walls 350 meters high and only 20 meters wide. Nearby you can visit the Alaón Monastery in Sopeira, an interesting example of Lombard Romanesque style. The well-preserved medieval complex of Montañana, with its streets, walls and buildings of unquestionable taste make us imagine life in the old Aragonese county of Ribagorza.

The Baserca sports preserve, located in the Baserca reservoir (also known as the Senet reservoir) is located in the Noguera Ribagorzana river, a few kilometres south of the Viella tunnel. Surrounded by peaks of over 3000 metres, including the Molieres and Besiberri peaks, it regulates the waters of the Noguera Ribagorzana river near its headwaters and other ravines, including the Salenca River. Fishing is focused exclusively on trout.

Created by a dam located between Tremp and Sopeira, this reservoir on the Noguera Ribagorzana River offers crystalline water and rocky nooks and water ideal for practicing all kinds of water sports and recreational-sports activities such as fishing, water skiing and canoeing, among others.

Located in the municipality of La Fuerva, it is one of the largest reservoirs in Aragon. Its dam is supported by the limestone materials that make up the El Entremón strait on the Cinca River, a few kilometres from the tail of the El Grado Reservoir. Various adventure sports companies in Sobrarbe offer sports and leisure boats around the Torre de Mediano, the church´s emerging bell tower, and the Usía River canyon. This bell tower has become a unique diving spot in Aragonese inland waters.

In addition to being a holiday resort giving access to the Pyrenees in the Sobrarbe region, El Grado, which reservoirs the waters of the Cinca River, can be a perfect excuse to approach the Sierra de Guara mountains, which combines the spectacular beauty of its famous canyons and ravines with villages of unquestionable attractiveness such as Alquézar, Barbastro or Monzón.

At the foot of the Pyrenees and uniting Navarra with Aragon, it collects the green waters of the Aragón River, showing in Tiermas the remains of an old nineteenth-century warm water spa already known by the Romans. Sometimes called the `Sea of the Pyrenees´, it gives access to the Hecho and Ansó Valleys from the north and from the south to the Cinco Villas regions, with the Romanesque villas of Sos del Rey Católico and Uncastillo, medieval sets of cobbled streets, palatial houses and Romanesque churches that invite you to lose yourself in their map feeling the memory of past times.

In the heart of the Central Pyrenees, the Gállego River concentrates its waters in the Búbal Reservoir. The spectacular views of the Tendeñera mountain range make this place a paradise for fishing.

The Mallos is another pre-Pyrenean corner created by the river Gállego. The Mallos de Riglos y de Agüero rocks are formidable rock formations of conglomerates of up to 300 meters guarding the valley as giant custodians, sheltering important colonies of vultures and other birds of prey. Nearby you must visit Loarre Castle, the best preserved Romanesque fortress in Europe, scene of several films and an evocative place to feel like a medieval knight./p>

Near Huesca we find the Arguis reservoir in the Isuela River. This is a good access to the Sierra de Guara mountains from its western side and to the Badiello Reservoir, in the course of the Gautizalema River, two pre-Pyrenean enclaves in a landscape of transition between the high peaks and the Ebro Valley. Between the two it is advisable to approach the Roldán Waterfall, where it is said that the legendary Frankish knight jumped from one rock to another in a portentous way when he fled from his enemies.

It is a centre for aquatic activities and bird watching very close to Huesca. You should not miss visiting this city so proud of its past. In Huesca the San Pedro el Viejo church, a jewel of Aragonese Romanesque architecture, and the Renaissance Town Hall, both in the nice old town, remain as vestiges of greater glory.

Other points of attraction in the territory

The Pyrenees make up one of the most attractive offers in Aragón. A land of high mountains in the steepest area of the Central Pyrenees. Wonderful valleys open to the southern plains, artistic richness in its temples, monasteries and gallant castles. Nature and art come together in the most serene harmony. The Candanchú, Astún, Formigal, Panticosa and Cerler ski resorts provide the largest ski area in Spain, with the latest technology in lifts and artificial snowmaking, and in summer offer multiple sports tourism activities. 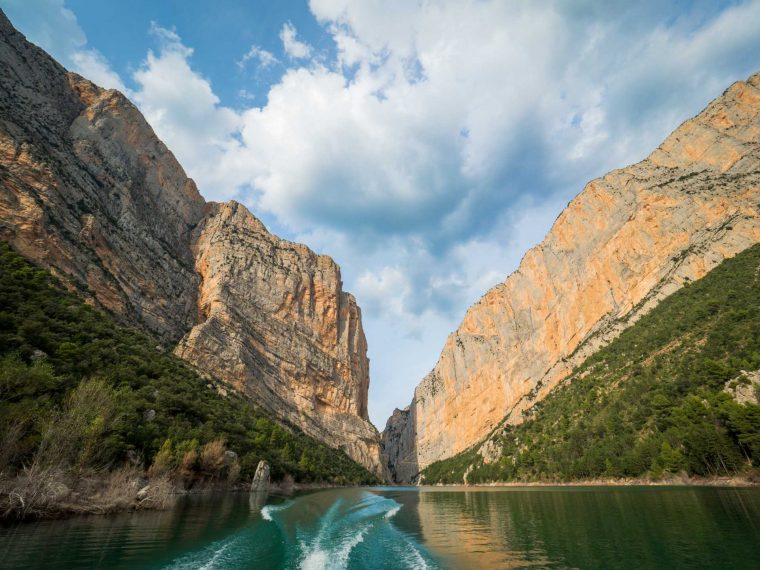 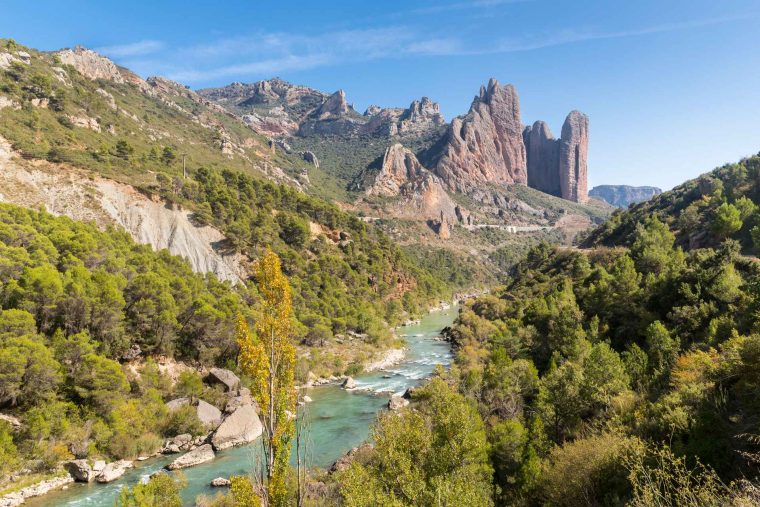 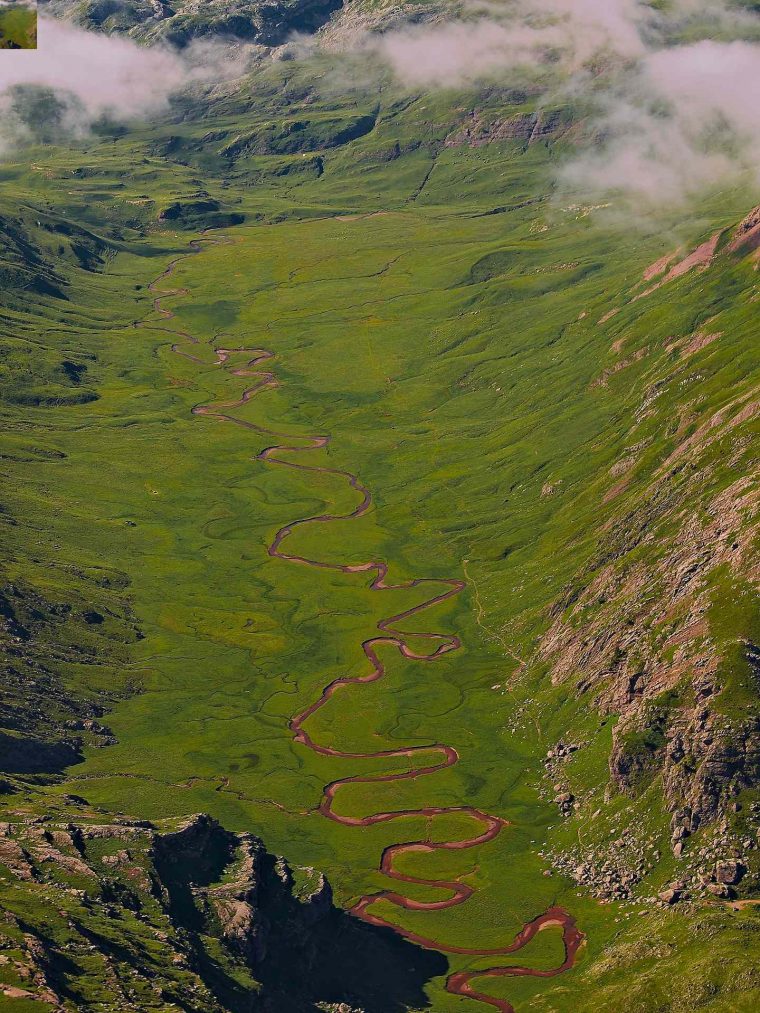 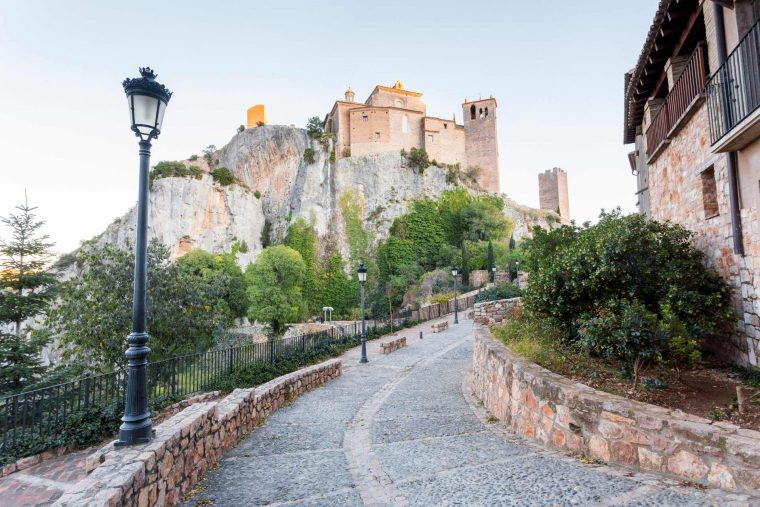 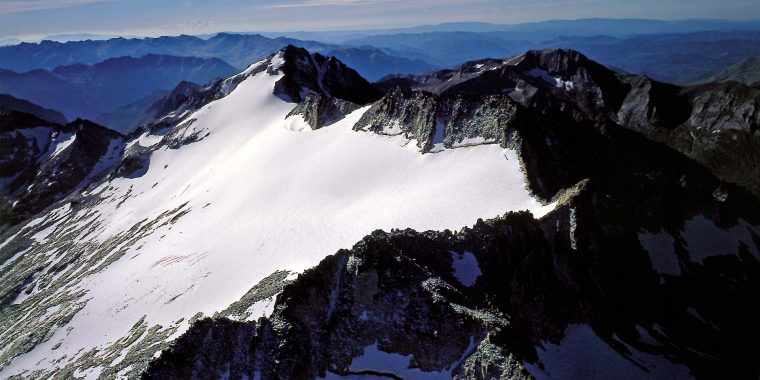 Valleys such as Hecho, Ansó, Canfranc, Tena, Pineta or Benasque, among others, or the splendid surroundings of the Panticosa Spa, and already in the pre-Pyrenees, the Cinco Villas, the Somontano de Barbastro and the Hoya de Huesca, offer the possibility of the most attractive excursions.
The Sobrarbe region has the Ordesa and Monte Perdido National Park and two Natural Parks (Posets Maladeta and Sierra y Cañones de Guara), as well as countless bucolic, special and somewhat magical spots.

The Sobrarbe-Pyrenees UNESCO World Geopark coincides exactly with the territory of the Sobrarbe County. The Ordesa y Monte Perdido National Park, also declared a World Heritage Site, as well as other protected natural areas, is part of a great diversity of habitats that extend throughout the territory.

The capital town Huesca offers the treasures of its Gothic cathedral and the Romanesque cloister of San Pedro el Viejo. Jaca shows the richness of its Romanesque cathedral. And there are still true jewels such as San Juan de la Peña, Santa Cruz de la Serós, San Pedro de Siresa, Roda de Isábena, the small and charming Serrablo Churches or the magnificent Loarre Castle, as examples of the best Romanesque, so linked to the St. James Way through Aragón. Beautiful urban centres such as Aínsa, Alquézar, Hecho, Ansó, Jaca, Montañana or Roda de Isábena, among many others, make Huesca’s tourist heritage practically inexhaustible.

Interpretation centres, museums and leisure parks all over Aragón help to decipher the traces of history and are a source of fun for the whole family (Lacuniacha, Dinópolis, Monasterio de Piedra, etc).

This website uses cookies so that we can provide you with the best user experience possible. Cookie information is stored in your browser and performs functions such as recognising you when you return to our website and helping our team to understand which sections of the website you find most interesting and useful.

Strictly Necessary Cookie should be enabled at all times so that we can save your preferences for cookie settings.

If you disable this cookie, we will not be able to save your preferences. This means that every time you visit this website you will need to enable or disable cookies again.